If you keep fish then surely you’ve dealt with ich (Ichthyophthirius multifiliis), a very common parasitic infection which can reek havoc on your aquarium if you don’t quickly take the correct steps in order to control and eradicate the outbreak.

Ich is one of, if not, the most mistreated fish illness that a hobbyist could expect to encounter. There are so many false rumors and opinions out there which is why the illness can be so deadly. This article will provide you with a detailed explanation of what ich is and which treatment methods are best for you.

Ich is an external parasite which has three different life stages, the most harmful stage is where the parasite is attached to the fish’s body and is usually visible to the naked eye, at this stage it’s considered a trophont. The second stage is what we call it a tomont, during this stage the parasite is free-swimming until it attaches itself to something inside of the aquarium such as substrate or plants. Once attached it begins to reproduce. Finally, it’s last stage we refer to it as thermonts, in this stage the parasite is free-swimming and once again looking for a host to burrow itself into and begin the process all over again. Ich can be difficult to treat because it lives not only on the fish but in the aquarium, so removing infected fish will not help. Once ich has infected one of your fish the parasite is ability to rapidly reproduce and within just a few days can infect many, if not all, of your fish. And probably the biggest problem with ich is that it can only be treated with medication during it’s free-swimming stages. When the organism is attached to the fish it can’t be harmed until it naturally falls off. It also can’t be killed whilst it’s reproducing.

Now let’s delve a little deeper into what ich actually does, when a fish is infected with ich this nasty parasite burrows itself under the fish’s protective slime coat and begins to feed off of the fish. This irritates and stresses the fish but the real reason ich can kill your fish is because when ich infects the gills it makes it very difficult for the fish to get enough oxygen and the fish that’s infected will eventually suffocate.

There are two theories on how to treat ich, one of the theories involves medication and a slight heat increase. The second theory involves a severe heat increase and the use of salt. I prefer the first method but we’ll go over them both.

If treating Ich with medicine you must remove any form of chemical filtration or you’ll be removing the medication. It’s also best to raise the temperature to the low 80’s, depending on what type of fish you keep. This is because the warmer temperature speeds up ich’s life-cycle so it will fall off of the fish faster and become vulnerable to medication. 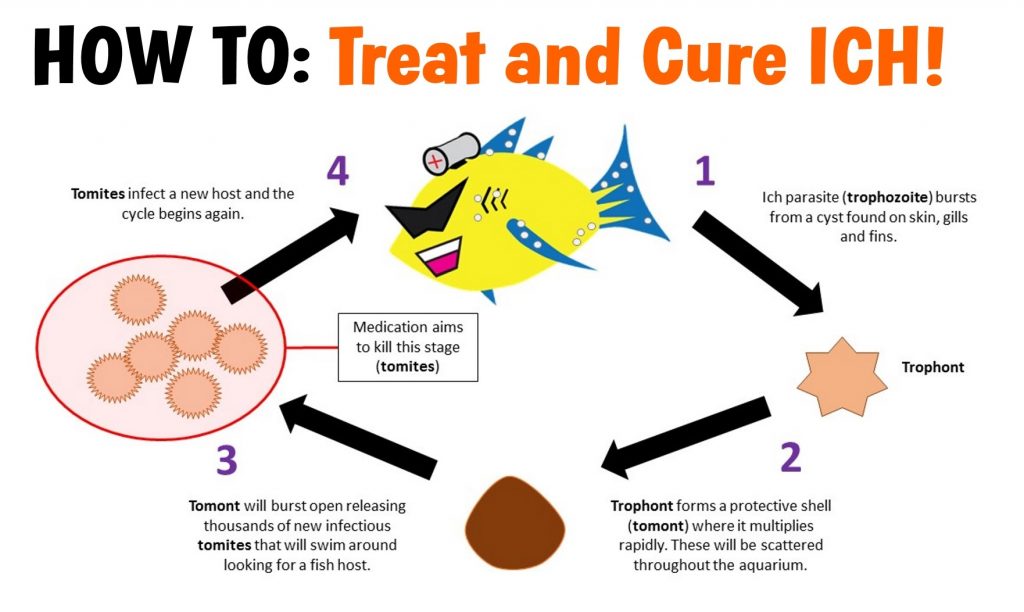 Do my fish have ich?

One good thing about ich is it’s extremely easy to diagnose, the most common symptom are white specks that look like grains of salt all over your fish. It’s best to begin treatment at the first sign of illness, you may only notice one or two white specks but within a few days there could be hundreds. Some other early warning signs are fish rubbing against things in the aquarium as if they’re trying to itch themselves. Loss of appetite, trouble breathing and clamped fins are all telltale signs of ich.

FOREWARNING: Never stop treatment too early. Continue whichever treatment you’re using for a minimum of three days after there are no signs of ich on any of your fish. Recommended to continue treatment for a full week to ensure you completely eradicate the parasite.

Treating ich with medication is my favorite approach, there are plenty of very effective medications on the market and if you have a question on a specific medication please shoot me a Facebook message and I’ll be sure to reply to you as soon as I physically can.  However, my favorite medications to use are Seachem Paraguard and New Life Spectrem Ick Shield. These two medications are safe for all freshwater fish, invertebrates and plants and I’ve used them in combination together. Paraguard is an effective broad-range medication that is made to “eradicate ectoparasites and fungal, bacterial, and viral lesions” according to Seachem. I use and recommend Paraguard because of how easy to use and how effective it is. Furthermore it does an excellent job of fighting any secondary infections that may develop as your fish’s immune system is compromised. Paraguard also doesn’t stain your water despite the fact it’s deep blue. New Life Spectrem’s Ick Shield is a medicated pellet designed to actually disrupt the trophont as it feeds on it’s host. To my knowledge this is the only medication on the market which does this. I personally have only used this in combination with Paraguard, never by itself, and I strongly urge you to never use this medication by itself. Because it’s only effective once eaten by the fish it has no way of killing any free-swimming or reproducing parasites so while it helps to reduce stress on your fish by limiting the damage the trophont can do it won’t fully remove ich from your aquarium and then you’ll end up with a recurring case of ich.

Follow the instructions on the bottle of whatever medication you’re using.

A lot of people prefer traditional methods as opposed to chemicals and for those people treating ich with a combination of aquarium salt or any salt that’s pure sodium chloride (not marine salts) and raised temperature can work well. This method doesn’t work well with cold water fish such as goldfish and certain corydoras catfish and any fish that’s sensitive salt will likely be even more stressed out by this treatment. A lot of plants also do very poorly when salt is added to the water. For these reasons I don’t recommend you use this method. However, if you want to use it anyway, you should raise the temperature of your water to at least 85 degrees slowly over the course of a few hours, this will stop the ich from reproducing and will do a great job of limiting the amount of fish that can be infected. If you’re confident in your heater and you keep fish like Discus that can withstand high temperatures you can slowly raise the temperature to 90 degrees which will literally kill the parasite. These high temperatures will reduce the amount of dissolved oxygen your water can hold so it’s absolutely vital you increase surface agitation when treating this way. Adding one to three teaspoons of salt per gallon is a generally accepted guideline. When adding salt, do it over a slow period of time and never add the salt directly to your tank as undissolved salts will burn your fish. Instead, mix the salt in a bucket with water and then do a small water change and add the salty water to your aquarium once you’re confident all of the salt is dissolved.

There are reports of ich that became resistant to salt & heat so if you’ve tried this method and haven’t had success then I recommend using medication.

The number one way to prevent ich is to setup a quarantine tank and quarantine all new fish for a minimum of 14 days. However, I know that not everybody has the ability and/or patience to do this. There are no other ways to guarantee you won’t have an ich breakout but keeping your fish stress-free and your aquarium clean is the best way to prevent all diseases, ich included.  On top of this, I highly recommend feeding your fish a varied diet to make sure their immune systems are strong. Soaking food in a product like Seachem Garlic Guard once or twice a week is a good way to help naturally boost your fish’s immune system.

If you have any further questions, feel free to message me on our Facebook page and I will be sure to get back to you as soon as I physically can.