The law of survival of the fittest still applies to the animal kingdom. We should think about introduce some liberal ideas in the animal kingdom as “democracy and the rights of the animals”, unfortunately not to the aggressive freshwater fish, even if kept in the aquarium their behavior remains normally the same.

Aggression is a behavior that develops on the development of the fish species and grow even in the most peaceful fish species; the conditions under which the fish can live determine whether the fish will be aggressive in order to survive. Here I will give some of these freshwater fish that are very aggressive.

This is a freshwater fish and the most aggressive of the aggressive freshwater fish species. This species of fish are found in the Amazon and rivers in southern Africa. The tetras, known as Dogtooth Tetras have used huge teeth to pin up small fish. While the most notable of the fish is Payara (another name for Payara is the vampire fish).

The Vampire Tetra Payara is a notable character, but not the typical Tetra. A look at the mouth of the fish and there is no doubt that the Payara is a devil carnivore. This amazing fish has two large fangs in its lower jaw. These teeth can be 4 to 6 inches long. In fact, the two large lower teeth are so long that the upper jaw has holes integrated. The Payara feed quickly and aggressively. These fish tend to swallow their prey as a whole, but sometimes they bite into smaller pieces, bite size, which can reach a length of 1.83 m (3.8 feet).

Hydrolycus genus has four types. Together they are called Pirandirá or Payara. His names are Tetra vampire, Vampire Characin, Payara Characin and saber-toothed fish. This fish teeth are frightening so just in case you catch one or do not let you hand in between those teeth because it can surely inflict a considerable damage.

This fish is bad or let me be fair here (its super mean), their territory is never shared with other fish because they are willing to chase or kill intruders. Aggressive cichlids are often territorial because they want to defend their own garden in the backyard against intruders since it is where they hunt and harvest. Well, I call this kind of male fish a real “Republican” since they are the more aggressive of the two, and tend to be crude to women who do not want to pair. Well, I am just being sarcastic just a little. There are certain types of quiet cichlids considered good parents and defend aggressively their children, come to think of it, good parents do not exist even in the animal kingdom.

Muskie or Muskellunge is a familiar sight in the lakes and rivers of northern North America. From close up they look like their relatives, pike and cucumber, and would argue that they just look the same as fresh water barracuda. They can grow up to 7 feet (1.8 meters) and weighing nearly 70 pounds (32 kg), this species are the largest members of the pike family.

Muskellunge do spend most of the time motionless in the weeds, waiting for a meal to swim. Once it decide to attack it does so with accuracy. However, the speed and power of the attack is remarkable. This is one of the top fishers when it comes to the ambushing prey. Muskellunge Name comes from a French translation of the word maashkinoozhe meaning the ugly pike “but the wildness of the species, rather than their appearance, make them scare fishermen. 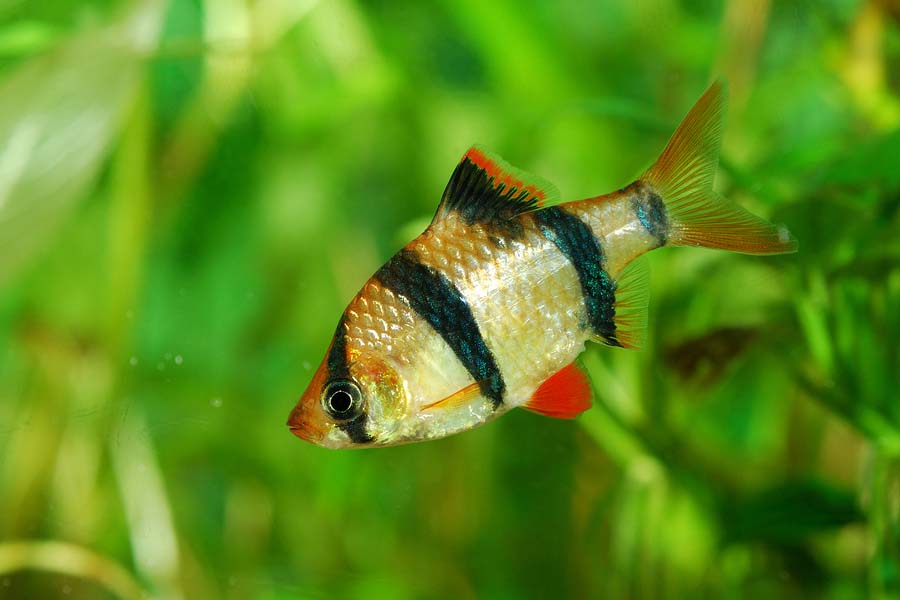 Male Betta fish are very common small fish, which behave very aggressively against each other and fight each other to the death. They are also very aggressive towards calm and shy fish and literally torment them to death, and a male Tigerbart will fight with a female to death, unless both are mating. Tiger Barb (Barbus tetrazona) belongs to the family Cyprinidae. The origin of the fish is from Indonesia, Sumatra and Borneo.

They are omnivorous hence they will eat probably anything. Their diet does consist of a variety of foods to help their immune system. They can eat frozen foods, living and crumbled and cooked vegetables and they seem to enjoy sugar beet hearts, worms and Artemia. The Tiger Barb is a yellow-orange color with four black stripes on his body. Breeders have spent years working to produce different colors. So far, they have created tiger bats in red, black, green and albino. Despite its aggressive and dishonorable nature, they are beautiful fish.

Wels Catfish is defined for a long time, without body scales; A large flat head; And a wide mouth with rows of small teeth like sandpaper – hundreds of them. It also has two sets of spikes (filament bodies) such as the upper and lower jaws that help fish to catch prey in the muddy waters of lakes and rivers that flow slowly in Europe. Their diet consists of annelid worms, snails, insects, crustaceans, fish, frogs, rodents, ducks and even other catfish. They even documented attacking pigeons by ambushing them on land, they captured and devour their prey in the dark depths. Wels Catfish can exhibit aggressive behavior during mating season, which makes it possible for this fish monster to be responsible for attacks on those entering its territory. Do not be scared there hasn’t been any confirmed attacks on humans by this fish all that there is just nothing but rumors.

There are more species of freshwater fish that are even aggressive but I have just provided a few for you. Do not get scared of being attacked by any of this fish as there have been no confirmed reports of attacks by any of the fish I have discussed above to humans.