As you probably already know, there are thousands of different kinds of fish in the world, in fact there are actually 30,000 species that we know about. We are discovering different species all the time, some of these fish a very harmless but you do get the odd type of aggressive fish that are actually pretty harmful if you were to run into some. These fish are usually only found in certain parts of the world, this article will be reviewing what we believe are the top 3 most aggressive fish out there. Most fish are actually very harmless and look absolutely beautiful in tanks and aquariums around the world. But you do get the odd fish that have a much darker side to them, The fish in this list are the types you probably won’t want to have as a pet, or keep around your family in any way. 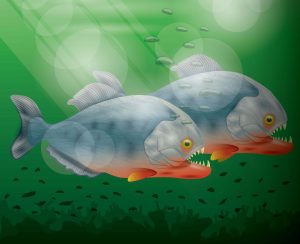 The first fish in this list is the Piranha, as you have probably already seen in movies, the piranha is one of the most aggressive and ferocious fish in the waters. Also known as the caibe or piraya there are in fact more than 60 species of this razor toothed carnivorous fish. The baddest species of the piranha are the red-bellied piranha that actually have the sharpest teeth of them all. One of the alarming aspects of the red-bellied piranha are that they hunt in groups sometimes getting as large of 100 of them. When a large animal has been attacked it is not unusual for several groups of piranha to converge on the animal and eat it. Although attacks on humans are very rare,if you find yourself with a cut and start to bleed I would suggest getting out of the water if you are in an area that the piranha like to frequent. Normally the piranha can be found in rivers and lakes in South America. 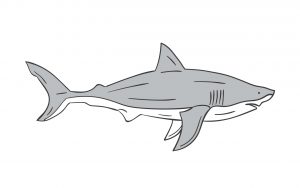 The biggest great white sharks usually grow up to 20 feet in length, but the largest reported great white measured at 37 feet. . However the average female is about 15-16 feet, and the average male grows to around 11-13 feet. Meaning if you see this swimming around when you are in the water you will probably want to get out as soon as possible. Needles to say this fish is so aggressively big you wouldn’t want to see one in person without being in a cage. 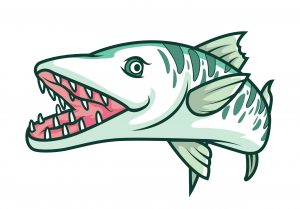 The great barracuda is the fastest fish on this list by far, its an absolute torpedo in the water. The mouth of the barracuda is terrifying, featuring large 3-inch teeth this fish has the ability to rip animals and people apart with ease. One of the even more impressive features of this fish is that it actually grows to be around 6 feet long and 100 pounds.

The barracudas are attracted to shiny metal objects and will attack when agitated. When you are in the water it is important to avoid areas with low visibility. The barracudas attack style is very simple, they actually prefer to lie and wait, then ambush their prey, relying on surprise. Hand feeding or touching large barracuda in general is to be avoided. Spearfishing around barracudas can also be dangerous, as they are quite capable of ripping a chunk from a wounded fish thrashing on a spear.

As you can see there are plenty of fish in the sea, some are more harmful than others, the three mentioned in this list are probably three of the most aggressive. If you find yourself in the water and get the attention of any of these fish you should try extremely hard not to draw attention to yourself. If there comes a time where this is the case you should get out of the water as fast as possible.